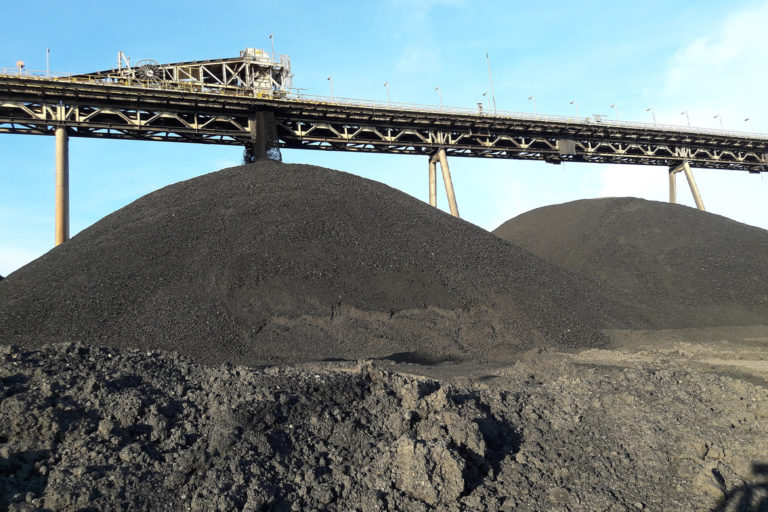 JAKARTA — A surge in coal prices is driving a wave of bank loans to miners in Indonesia, the world’s fifth-largest coal producer and top exporter.

By continuing to finance the fossil fuel industry, banks like Citigroup, BNP Paribas and Standard Chartered are making it harder for Indonesia to transition to clean, renewable energy, analysts say.

“Now that there’s a surge in commodity prices, banks are rushing to channel loans to mining companies [to procure] heavy equipment or capital,” Bhima Yudhistira Adinegara, director of the Center of Economic and Law Studies (CELIOS), a Jakarta-based think tank, said in a recent online press conference.

Data from Indonesia’s financial regulator, the OJK, show that lenders channeled 26.83% more money to the country’s mining industry in January 2022 compared to the same period in 2021. The increase is much higher than the year-on-year growth in overall loans of 5.79%.

It comes as global coal prices are hitting record highs, more than $400 per metric ton, as a result of global uncertainty over energy supplies due to the Ukraine conflict and sanctions on Russia, which accounts for around 20% of global thermal coal exports.

Between 2016 and 2021, about $16 billion in credit went to mining companies in Southeast Asia, according to data from finance monitoring platform Forests & Finance. The top five lenders identified in the data set are Citigroup, BNP Paribas, SMBC Group, MUFG, and Standard Chartered.

In Indonesia, the boom in lending is especially pronounced in the province of East Kalimantan, the country’s coal-mining heartland. According to official data, bank loans to the provincial mining industry grew by 74.36% year-on-year in February 2022, compared to 18.87% growth in overall lending.

Made Yoga Sudharma, who heads the East Kalimantan office of banking regulator OJK, said this is because the province’s economy is still dominated by the mining industry. He said financial institutions are bullish on the industry due to rising global coal prices.

“In 2022, this sector has become a prima donna once again, and even enjoying its highest price in the past few years,” Sudharma said as quoted by local media. “That’s why the credit also improves.”

Non-bank lenders are also tapping into the growing demand for credit from miners, channeling 56.61% more in loans, usually for financing the purchase of heavy equipment, in February 2022 compared to the same period of time in 2021, according to the OJK data.

In 2017, a senior executive at BlackRock, the world’s largest investment group and one of the two largest investors in mining, declared that “coal is dead,” and that “anyone who’s looking to take beyond a 10-year view on coal is gambling very significantly.”

Major coal financing countries, including G20 members like China, have vowed to stop overseas coal financing due to its contribution to global warming and water and air pollution, in line with long-running grassroots opposition to coal mines and plants worldwide.

In Indonesia, where the mining and burning of coal have increased rapidly since 2000, the environmental impact has been devastating. Lack of environmental oversight has led to widespread allegations of water pollution and degraded landscapes in the country’s main coal-mining regions of Borneo and Sumatra, and the boom in burning coal for electricity plays a key role in increased air pollution concerns around the capital, Jakarta.

By continuing to fund mining companies, financial institutions are complicit in this environmental destruction, according to Edi Sutrisno, executive director of TuK Indonesia, an NGO that advocates for social justice in the extractive industry.

“Data that we have from Forests & Finance shows how big of a role financial institutions play in destroying the Earth,” he said.

And with the increase in lending to miners, experts have expressed concern that this will prolong the life of mining companies, allowing them more time to continue polluting the environment and driving deforestation in tropical regions.

“Financial institutions that should be the main engine of climate change mitigation by funding the clean and renewable energy sector it turns out are still be trapped in short-term profit [thinking] by funding the extractive sector,” CELIOS’s Bhima said. “Don’t let banks use the high commodity price to wash their hands of [their] environmental responsibilities.”

Bhima cited a 2021 study published in the journal PLOS ONE that found that every 1% increase in green credit issuance in China relative to industrial loans increases the per capita gross domestic product (GDP) by approximately 4.6 yuan, or 0.012%, through air quality and labor supply.

Green credit financing is a type of financial service provided by banks to encourage borrowers to commit to green investments and achieve sustainable development.

This means that banks have another option to generate profits, which is funding the green sector like renewables, Bhima said.

“So it’s not true that just because there’s an increase in commodity prices like coal and nickel, banks have to be an opportunist by providing loans to the extractive industry,” he said. “That’s a grave mistake.”

Bhima added that capitalizing on a boom in commodity prices by providing loans also carries a huge financial risk. This is because when a commodity price is surging, it’s usually followed by a crash , he said. And this cycle of boom and bust is getting shorter, Bhima added.

In 2014, coal prices began to fall, hitting 12-year lows in 2015 due to soaring production and a slowdown in global buying. This resulted in many miners being unable to pay off bank loans taken during boom times, according to the OJK’s Sudharma.

Funding fossil fuels also carries reputational risk, as more customers are demanding that banks not use their money to fund industries that pollute the environment and exacerbate climate change, according to Bhima.

“Customers are becoming more aware about how their money is being used,” he said. “When their money is channeled to sectors that are not environmentally friendly, they’ll become cautious and they can shift their money to other banks that are more sustainable.”

Launched in January this year by President Joko Widodo, the guide defines economic activities that support environmental protection efforts and management efforts, as well as climate change mitigation and adaptation. It applies a “traffic light” system, where green means a business activity doesn’t do significant harm, provides a positive impact on the environment, and is aligned with the environmental objectives of the taxonomy. A yellow label means the activity does no significant harm, while red means harmful activities.

“[Our hope] is that the green taxonomy could really be enforced so that there’s still investment in the future in Indonesia, investment that’s green and sustainable,” Edi said.

But the guide allows for mining activities to be labeled yellow, as long as they adhere to environmental regulations and reduce emissions through means such as carbon capture, utilization and storage (CCUS).

Experts have criticized this labeling, saying it means banks can still provide loans to the mining industry and be considered to be doing no significant harm to the environment.

“The green taxonomy should have been designed to push, not delay, the ongoing energy transition and to support the development of renewable energy rapidly,” she said as quoted by local media. “That’s the only way for countries to move toward a green economy and hasten their climate targets.”

“There’s no planet B, there’s only one Earth,” he said.

That’s why it’s critical for financial institutions to not only commit to stop funding mining, but also walk the talk, Bhima added.

Without any concrete actions, financial institutions’ commitments are only empty words, as youth climate activist Greta Thunberg pointed out in a speech last year, according to Bhima.

“Build back better. Blah, blah, blah. Green economy. Blah blah blah. Net zero by 2050. Blah, blah, blah,” Thunberg said at the Youth4Climate summit in Milan, Italy. “This is all we hear from our so-called leaders. Words that sound great but so far have not led to action. Our hopes and ambitions drown in their empty promises.”

FEEDBACK: Use this form to send a message to the author of this post. If you want to post a public comment, you can do that at the bottom of the page.